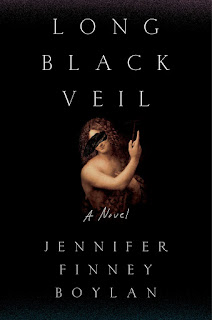 This novel was my first experience with the author's work and I was left with the sorts of mixed feelings I seem to keep encountering the more I branch out with reading author's new to me. There's a the part of me that sees the skill and is like "ok, yeah I understand why this person it writing books for a major publishing house the talent for storytelling has been witnessed. This ability is what kept this book from being unpleasant and it wasn't, at no point while reading 'A Long Black Veil' did I ever want to say "screw it" and leave it to sleep among my other DNF novels. It's also what leaves me open to the idea of reading some of the author's other work. That being said this particular novel did not work for me at all. It was just such an odd bizarre story. This book starts out feeling like a horror novel, the book blurb described it in a way that made me think it was suppose to psychological thriller type deal, it was actually mostly about gender identity and how someone handles who they were born as, who they once lived as, and who they've chosen to become.
There's also an abortion, a boy/man with a vaguely described developmental/neurological condition, a cop who was also a roofie rapist obsessed with a missing person/ murder, and another cop who is apparently so abhorrent at her job she thinks that a women found dead with her husband's pocket knife proves he murdered her because married people have each other's possessions on them? There's also a very sweet character who's obesity is repeatedly mentioned. None of these things actually have anything to do with the story and serve very little purpose. To me it felt as if the author attempted to hide the superficial nature of this stories smaller characters by assigning extreme events or off the wall characteristics to them. It ends up providing a distracting sense of absurdity to the story that didn't feel intentional. It was all just a little to chaotic and the aspects of the story just didn't meld well together.

Review: Once Upon a River

Once Upon a River by Diane Setterfield My rating: 3 of 5 stars The plot was extremely slow, there were a...

A Court of Frost and Starlight
by Sarah J. Maas

Royals
by Rachel Hawkins
OK. Straight up, I liked this book! Don't care what anyone else has to say about that. It was a quick, fun read, and it finished before I was ready to leave the characters. In my opinion that’s a book that has succeeded. Yes, this is bas...

Rebel of the Sands
by Alwyn Hamilton